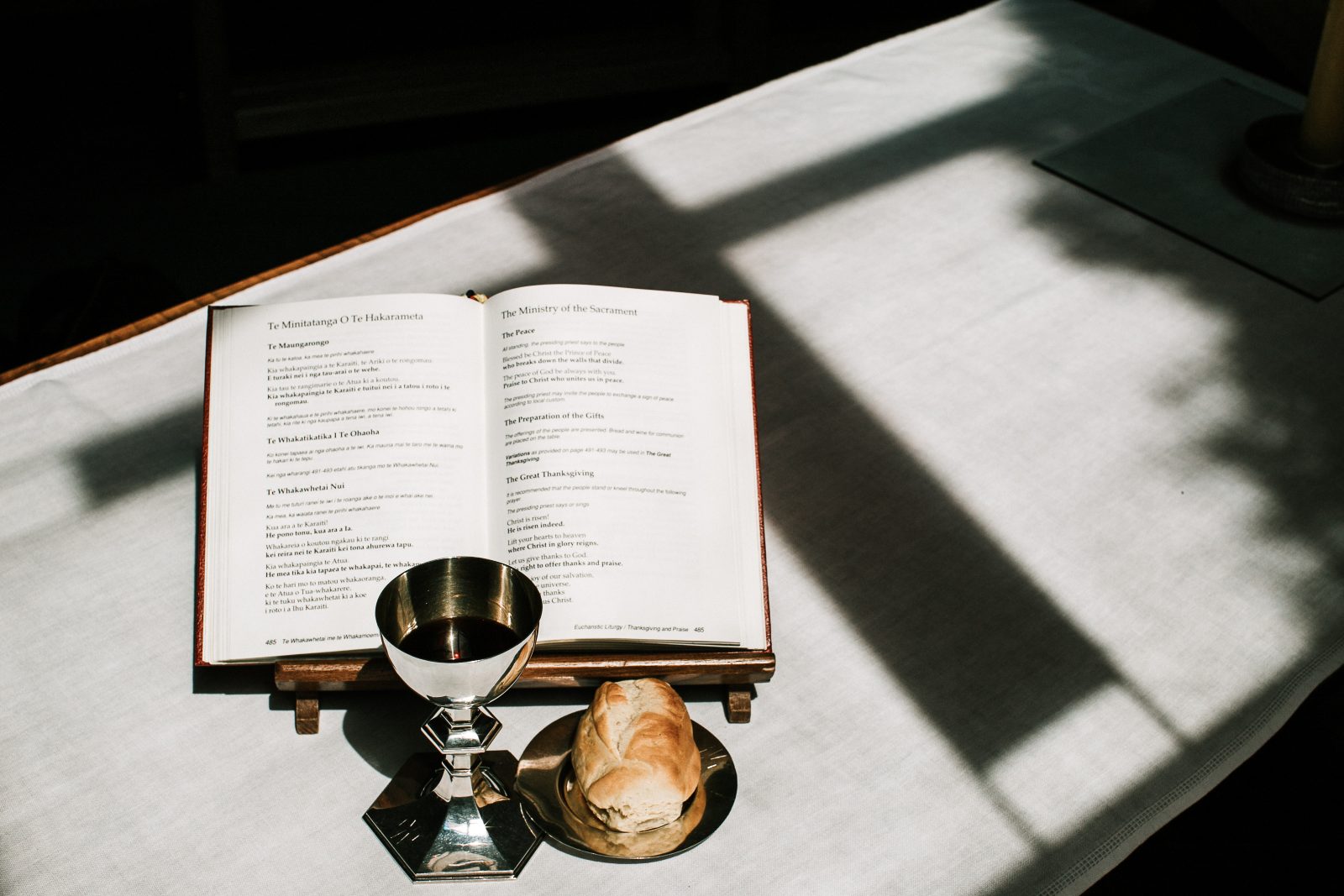 And he took bread, gave thanks and broke it, and gave it to them, saying, “This is my body given for you; do this in remembrance of me.” In the same way, after the supper he took the cup, saying, “This is the new covenant in my blood, which is poured out for you. (Luke 22:19-20)

They devoted themselves to the apostles’ teaching and to fellowship, to the breaking of bread and to prayer. (Acts 2:42:2)

Jesus who introduced himself as “the bread that came down from heaven.” He did this in a sermon in John 6. Some disciples were offended when Jesus said, “. . . Unless you eat the flesh of the Son of Man and drink his blood, you have no life in you.” The offended disciples immediately stopped following him.

Jesus then initiated the communion, the breaking of bread, at the Last Supper. He was celebrating his Passover with his disciples before his death on the cross. The Passover had always commemorated God’s passing over the homes of and sparing the firstborn sons of the Israelites during the tenth plague when he killed all of the firstborn sons of the Egyptians. God had commanded that the Israelites sacrifice a spotless lamb (or goat) and mark their doorposts and lintels with its blood. The blood of that sinless lamb saved the Israelite firstborn sons. (Exodus 12:21-22) So now, Jesus, the true Passover Lamb, had come to the earth and he was offering up his sinless life not just for the Jewish people, but for all people.

For Christ also suffered once (on the cross) for sins, the righteous (Jesus’ death) for the unrighteousness, to bring you to God. He was put to death in the body but made alive in the Spirit. (1 Peter 3:18)

So, that communion became a form of worship in which Christians memorialize the sacrificial death of Jesus Christ on the cross for all sin. It is called the Eucharist or the Lord’s Supper in some religious customs. All people can now celebrate his sinless death which brought salvation, wholeness, restitution and restoration for all into the kingdom of God, as well as eternal life.

With each communion, believers honor Jesus’ sacrificial, atoning death by using natural elements to represent his body and his blood. Natural bread symbolizes the body of Jesus which was broken for the sins of mankind and it is eaten in remembrance of him. (1 Corinthians 11:24) Wine (or juice) symbolizes Jesus’ shed blood in the new covenant. (1 Corinthians 11:25) These natural elements are physical replicas of the spiritual and they symbolize the benefits that believers receive from Jesus’ life, death and resurrection.

In the same way also he took the cup, after supper, saying, “This cup is the new covenant in my blood. Do this, as often as you drink it, in remembrance of me.” (1 Corinthians 11:25)

It is important to remember that communion is a serious form of worship. Paul cautions believers in 1 Corinthians 11 to:

When believers make sure that there is no sin in their lives, they do not come under the judgment of the Lord. When believers take communion in sin, they are disciplined so that they are not “condemned with the world.” (1 Corinthians 11:32) Communion is for believers in Christ only.

The early church viewed the breaking bread as being just as important as the apostles’ teaching and fellowship. Acts 2:46-47 states that all believers broke bread in their homes (house churches) with gladness and sincere hearts, praising God.

As I write this blog, I am reminded of the lyrics to a song that is often sung in churches:

What about you, my friend, is communion a part of your worship?