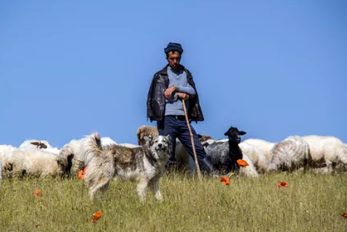 4 Yea, though I walk through the valley of the shadow

of death, I will fear no evil: for thou art with me,

thy rod and thy staff they comfort me.

Like the Psalmist, David, we have had times of grief, sorrow and trauma, walked through the valley of the shadow of death.  David suffered persecution when Saul tried to kill him;  he was betrayed by people who proclaimed to be his friends; his kingdom was ripped from him by his own son, Absalom.  There were many times that he suffered and was fearful.  The good news that David could proclaim was that the darkness and evil that he walked through were a “shadow of death”–not death, for God was with him all of the time and he needed not to fear the evil.  It is the same with us, through the times of distress and troubles, we are to be encouraged and fear no evil; we are not to fear “the shadow of death” for God is with us. Heb 13:5 states, . . .  God has said, “Never will I leave you, never will I forsake you,”. . . (NIV)

The shepherds carried a rod and staff. The shepherd’s rod, worn on the shepherd’s belt, was used to defend the sheep from predatory animals and robbers. The staff was used to gently correct and guide the sheep. The staff had a hook at the top which fit around the neck or head of the sheep to nudge them in the right direction. The bottom end contained a shovel in which the shepherd scooped up mud or dirt and flicked at the sheep to re-direct wandering sheep back to the herd. (www.answers.com/QWhat) So, the rod provided protection for the sheep and the staff disciplined them.

Jesus, our Shepherd, protects and disciplines us. He sacrificed his life on the cross for our sins and then sent the Holy Spirit to dwell within us to guide and direct us into all truth. We also have the blueprint for living–His Word, the Bible. Jesus also disciplines us. There are examples of sin bringing penalties in the Bible: King Saul continually disobeyed God and the kingdom was taken from him; David was disciplined for committing adultery with Bathsheba and killing her husband; Ananias and Sapphira lied to God and immediately died.

In the case of David, when Nathan the prophet confronted David on behalf of God about his sin of adultery with Bathsheba and the killing of Bathsheba’s husband, Uriah. David’s sin produced consequences for him and his future generations:

“This is what the Lord says: ‘Out of your own household I am going to bring calamity on you. Before your very eyes I will take your wives and give them to one who is close to you, and he will sleep with your wives in broad daylight. You did it in secret, but I will do this thin in broad daylight before all Israel.”

So, both the rod and the staff bring comfort, David knew that even when he was being disciplined, it was better to be in the Shepherd’s hands than anywhere else. We can know and have that confidence in the Good Shepherd, too.